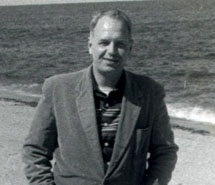 Franklin Conner, my maternal grandfather’s brother, was an outgoing, generous man. However, one night he was supposed to meet some of his family for dinner but he never showed up. While they were waiting for him he killed himself.

I learned the story of my great uncle Franklin doing genealogy research. Recently I traded emails with my grandfather’s (and Franklin’s) half sister, who told me some things about Franklin I hadn’t known. I’d been interested in the kind of person Franklin was for some time, as well his mother – my great-grandmother. You see, all I knew of my great-grandmother was she ran off with the kids (my grandfather and his brother Franklin) to Miami, leaving her husband and the rest of her family behind in Vermont. She was a disgrace to the family. All I knew of Franklin was he died by suicide, and in the few pictures I had he seemed sad… almost haunted. From this I assumed they were part of a long history of mental illness in my family, plaguing my mother, me, and possibly my daughter. I’ve thought about this for some time.

Recently, as I’ve dealt with my own depression, I’ve come to resent them. A part of me came to blame them. I know I wouldn’t be around if not for them, and there’s much I have to be grateful for, but rationality and depression don’t always go together.

Through my great-aunt I learned of Franklin’s outgoing, generous nature. I learned he was an educated man. He went to school at the University of Florida – my alma mater. There were elements of his personality I recognized in myself, and some things I aspire to.

These revelations about Franklin’s life have me re-evaluating my feelings about my mother’s family. Maybe Franklin was mentally ill, I don’t know. Maybe it exacerbated a troubled soul. However, maybe he’d lost his job, his home and found himself at the end of his rope because he was an openly gay man in the wrong place – and most assuredly the wrong time.

There is no more animus in my heart for Franklin or my great-grandmother. Instead there’s guilt, sorrow and anger.

I feel guilt for laying any blame on either of them for my own problems. I know so little about my great-grandmother’s life, I have no right to judge her actions. I feel sorrow for the pain Franklin must have felt, being singled out for mistreatment just for being who he was. And I feel anger. I feel anger for the way we still find differences rather than common humanity between ourselves, and use it as an excuse to hurt.

Where ever you may be Franklin, I’m so sorry.