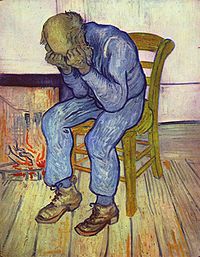 I’m feeling up and down right now, and that’s the problem. I’m up four hours before I’m supposed to wake up for work (it’s a little past 2am here as I write this), and I’ve yet to get a whiff of sleep. I’m up because I’m down, for reasons I can explain and others I can’t.

Cheryl finally convinced me to see our doctor, but the outcome was a little different than she was expecting. I’ve been treated for panic/anxiety disorder in the last few years, but I’ve had bouts with depression all of my life. Looking back, I can see signs of a few depression disorders (though that may just be my undergrad degree talking). Anyway, lately I’ve been wondering if my symptoms (fatigue, headaches) could be related to depression… so I told my doctor I was depressed. The headaches and fatigue have been holding steady, but the depression has been getting worse, even as some things in life are getting better. So rather than monkey around with the meds for my headaches, we’re monkeying around with the meds for depression/anxiety… slowly weaning off of one while slowly introducing another.

Plus, she threw in another visit to the phlebotomist for good measure. The weight loss tally since late November is approaching fifty pounds.

It’s not fun being in between medications… weaning off of one that kind of worked, waiting for the new one to slowly build up and kick in. I’ve been a wreck. It’s been hard to concentrate on the simplest tasks. It’s been hard to get out of bed in the morning, and hard to get back in come nightfall. Nothing gives pleasure. Stuff that was fun now feels like a chore. To top it off I hurt my back last week, forcing myself to stay active (knowing physical activity is one of the ways to fight depression). Between my aches, pains and emotional state I don’t know how anyone can live around me.

Cheryl insists she didn’t notice my mood was that bad. She’s either lying to make me feel better or I’m way better at masking my emotions than I thought. I always thought of myself as a whiner, but I suppose even that requires some minimal amount of speaking or communication.

I can tell you I’m depressed, which is sort of an explanation for why I’m up, but it feels lacking. Can two syllables ever truly explain how you feel, particularly when it casts such a shadow over so many aspects of life? I can tell you I’m depressed, but how do I begin to explain the sense of dread? The absence of energy or enthusiasm? How do I explain the frustration I feel, knowing it’s all in my head, unable to pinpoint a reason… an event or circumstance in my life as the cause? I wish I could. I live in fear my emotional state is interpreted as laziness.

Or worse, I’m using a family history of mental illness as an excuse to be lazy. I don’t really think it’s true, but some people who suffer from depression can be very creative coming up with reasons to hate themselves.

Now Cheryl’s on the verge of killing me herself. A combination of lethargy and insurance problems have put off my oncology follow-ups. I’m more than three months overdue for my checkup. If there’s one thing I’m good at, it’s rationalization. So good in fact, that I’ve placated Cheryl (who’s not easily placated when it comes to her family’s health) for a little over three months. Stupid? Monumentally. Will it amount to anything? Probably not. I should be good for another nine to ten years. It’s one more way depression has affected my life. It’s one more example of how depression can just as easily be written off as just another lazy whiner.

My real fear in all of this is that it’s more proof I’m my mother’s son… that I’m destined to follow in her footsteps… to gradually lose my mind entirely and end up in a state hospital. Seeing her there, seeing what she’s become and how she’s come to live… it’s more than mere fear. It’s damn scary.