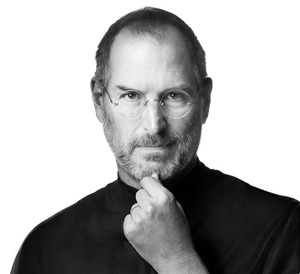 Many great pieces will be written about Steve Jobs today, as his death becomes widely known while people watch or listen to the morning news. At least a few (if not many) will probably hit upon some of these thoughts, my thoughts.

Many things have inspired me. Some are obvious: my wife, my kids, my friends, my passions, my pains. Others aren’t quite so obvious, like the feel of a seemingly perfect pen gracefully marking seemingly perfect paper, as if my very soul was flowing through the tip. An outstanding piece a friend wrote late yesterday inspired me to write this post. It’s probably best you read his post now. I won’t do it justice rehashing it, yet this post will make more sense given the context of its inspiration.

When people talk about Steve Jobs they often talk about design. Some use the term to lionize the man, while others use it to dismiss him and his “so-called innovations.” For those who dismiss him, I wonder if they’ve ever held that perfect pen in their hands.

When I talk about Apple, I often mention my old PowerBook. For those who don’t know, PowerBook was the brand name for a line of portable computers Apple made until early this century – eventually replacing it with the “MacBook” when Apple changed the engine it’s computers ran on. It was a branding decision made due to the strong association the word “power” had with its old processors. My PowerBook was the smallest model: twelve inches measured from opposite corners of the screen. Everything about it seemed perfect at the time: it’s size, shape, keyboard, and build.

I wish I could give you a list of specifications and adjectives to describe it, but I’m not that good a writer. What I can say is my computer – a term not often associated with warm and fuzzy, or mythical muses – was my perfect pen. Writing was always simpler when my fingers graced its keys. Better words always came to mind. I was always more satisfied with the results.

The question is why?

The Apple trash talkers will insist I’ve been hoodwinked, a victim of the Jobs “Reality Distortion Field.” They might even tell you I’m the victim of what amounts to a cult.

But I have a different answer.