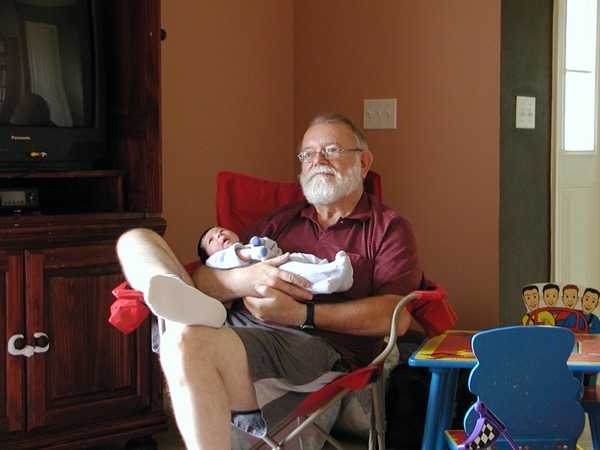 Dad slipped away quietly yesterday afternoon. Christy and I held his hands as he went.
He left with much more dignity than life afforded him in these last twelve months. His inability to find the right words for speech largely became an inability to speak. He went from walking to walker to wheelchair seemingly with haste. Six months ago he still fought the limitations which both grew in number and remained undefeated. He couldn’t tell us explicitly, but he seemed resigned… ready to go. So when an infection quickly began to overwhelm yesterday…

There are moments when I find comfort in this. My mind tells me it was the right thing to do, but my heart feels pulped, and I struggle to accept I now live in a world that no longer has my father in it.

Dad! I got into grad school! Wait. Dad?

“It was as if tens of thousands of dollars suddenly cried out in terror and were suddenly silenced.”

The US economy shrank by 32.9% between April and June, its sharpest contraction since the second world war, government figures revealed on Thursday, as more signs emerged of the coronavirus pandemic’s heavy toll on the country’s economy.
The record-setting quarterly fall in economic growth came as another 1.43 million Americans filed for unemployment benefits, a second week of rises after a four-month decline.
The annualized figure is the largest drop in quarterly gross domestic product (GDP) – the broadest measure of the economy – since records began in 1945.

Looks like I picked the wrong week to quit unemployment benefits

Ugh. There’s more evidence – courtesy of the last 48 hours – that there’s a point at which growing older can no longer be graceful. My mother passed this point years ago. Although my father passed this point a couple of years ago, grace exists on a continuum – and it’s always possible to have less. This was on display earlier this week, at two different hospital emergency departments.

There will be no adult beverages for me this evening. I need to be able to drive to a hospital if I get another call.

I kinda hope I have a cold.

It’s a strange thing to say, I know. But these are strange times we’re living in, friends. Unless my symptoms get worse I won’t be testing for COVID–19. I’ll just be waiting.

I’m popping Tylenol every six hours to keep the headaches and sore throat in partial check. I’m reading to keep the boredom in check. And I’m sleeping a lot… because I’m freaking tired.

I sat down to write thinking I had something interesting to say, though now that I’m here I can’t remember why. Delusions of creativity?

As far as I know, my parents do not have a cold. They live 15 minutes away but they might as well be on the other side of the world. They live in a facility that has locked itself down. I can only imagine what it’s like, and that’s the problem. My imagination does not serve me well when it comes to creative pursuits of leisure, but it works overtime drafting worst-case scenarios (or merely terrible ones). My imagination doesn’t even have to work that hard, with what I hear on the phone and with the stories related to me by my sisters.

Maybe I’ll write about it sometime.

I live in a small-to-medium size Florida city, which for a time had the largest, per-capital concentration of COVID–19 cases in Florida. I don’t live in South Florida.

Me, my family, and my coworkers all watched the news – as many of you did – about the pandemic. We saw other states close down. The county government here issued a stay-at-home order, about a week before our Governor did, but little seemed to change. We were still required to report to work. As I type this, we’re still getting in our cars and driving in to work each morning.

Today is the first day under the Governor’s stay-at-home order… and near as I can tell, many folks in my town are still out and about, still doing what they did before COVID. I look out at the highway outside my office window, and I see just as much traffic. I drive around at lunch and see business parking lots filled with cars.

I know I only see a small sliver of one small city. I know evidence via anecdote isn’t much better than no evidence at all. Still, I can’t help but worry we’re not taking this seriously. I can’t help fearing all the mixed messages are causing what I’m seeing, and it’s not just me and my small sliver of a small city, it’s all over. I fear that I’ll get sick when everyone else is getting sick, and my medical history will lead me to be one of the more severe cases. I worry about my wife’s asthma. I worry about my parent’s advanced age. I worry our leaders will weaponize our fears. More than ever, I worry about the world our children will inherit. I feel utterly helpless… without means to do anything about it.

Thankfully, I’m not worried about my job – because I’m apparently essential. I sure don’t feel like it.

I don’t think I’ve ever been told I’m essential and come to work feeling less so.

The other day I tried to pull up the (recent) history of COVID-19’s spread in Florida. I couldn’t find it – not easily anyway.

The current numbers are available… everywhere you look. Finding anything further back than the current day took a little more effort.

While I was searching… one day at a time… I threw the figures I found into a spreadsheet (mostly from the FL Department of Health, via the internet archive). Then I kept updating it in the days that followed.

I’d like to think I won’t be able to keep this up, because COVID-19 won’t be something that will remain long in our lives.

The way we’re going, I fear I’ll be adding many more – much larger numbers.

A lot of fond memories at the old UF Infirmary…

“The infirmary could be demolished, but there is discussion about whether to find a new use for the building.”