Cheryl and I did a half day on the bikes yesterday, peddling through the flat rural landscape of north Florida. We did an out-n-back along a twenty mile stretch of paved trail, converted from an old rail line between Keystone Heights and Palatka, FL. It was my first ride of forty miles (or more) in at least four years – and late-forty legs REALLY felt the last five miles. But it was a great ride. Some folks find the long straightaways a bit monotonous, but I find ‘em hypnotically peaceful. The air was cool (for FL), the wind was calm, and the soft whir of spinning spokes and churning chain made it easy to forget the rest of the world for a few hours. 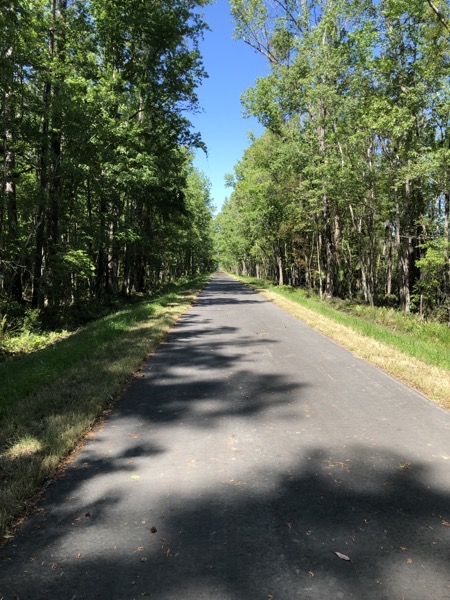 My dad put me on to this one… a bamboo bike frame. Supposedly it compares favorably to carbon fiber in both strength, performance, and weight. I think it’s just about the coolest thing I’ve seen in months, and I don’t usually impress very easily.

(Click the image to see a much bigger pic. From Calfee Design)

For no particular reason, I was thinking about the things that I do poorly the other day. (You may be reading this and thinking about the same thing.) Last night I got on my bike and everything got a whole lot better. I’ve missed bicycling. I’ve never tried meditation, but I wonder if my bike has a similar effect (on me).

I hop on my bike, start peddling, and for long stretches I lose track of time. The sounds of cycling can be as soothing to me as a mother’s heartbeat to her child: the greased whir of the chain following it’s serpentine path, the low pitched hiss of the tires speeding along smooth asphalt – surging a little with each revolution of the pedals, the sound of the air’s gentle resistance as you push it out of the way. My mind is freed by these sounds. On my bike, my mind is free to sort through the all the junk that’s hastily collected during the day.

I suppose it’s not exactly like meditation, not that I have any idea what I’m talking about. My pop-culture knowledge of meditation suggests it’s more of a mind clearing exercise; whereas when I get on my bike it doesn’t empty, it kind of free associates. I don’t actively think about my day, it just kind of falls together. You may be reading this and saying to yourself that a lot of the parts must be fitting together poorly, and I’ll grant you that. But to me, everything seems to fit better after I’ve abused my pedals for a while. Hell, even my typing seems better afterwards.

On an intellectual level, I knew that going ten months without exercise (of any kind) would have an effect on my body. Yesterday I did twenty minutes on the rollers* in a low gear (with both resistance units removed), and I just about died. I was dizzy, my legs were reduced to two pillars of Jell-o, and my heart wanted out in a big way.

I thought I was starting out slow, but maybe I need to ratchet down my expectations. That and maybe get a heart rate monitor. That way I can make sure I’m not overdoing it, rather than just being unaccustomed to exercise and how it feels afterward.

Welcome to my latest attempt to reintroduce my body to activity. There have been other attempts, but I’m hoping this one sticks. I think my last doctor’s appointment may have scared me straight (a little). Not only has my weight been creeping back up, but my blood pressure has been creeping along with it. That ain’t good. With all the benefits that come with exercise (less stress, less depression, less fat, lower blood pressure), I really should have started sooner. It could just be in my head (there’s lots of crap up there to keep it company), but I feel a little better today already.

Long time readers may know my “rollers” are like a treadmill for my bike. It consists of three parallel “rollers” in a metal frame, which look like long rolling pins (about twenty-four inches long). My bike sits on top of the rollers; the back wheel cradled by two of them, and the third just in front of center on the front wheel. A long belt attaches the front roller to the middle roller, which spins the front wheel when the rear wheel spins. The bike sits free, allowing you to “ride” indoors, much like you would outdoors.

I could just ride outdoors, but I don’t trust myself enough yet. Riding outdoors gives me a bit of a rush, and I’m liable to ride out further than I should… leaving me exhausted, and miles from home. (A sure recipe for overdoing it.)

Riding the rollers can be just as exciting as riding outdoors. Some of my worst bike wrecks have happened indoors… even worse than at least one involving a car (well, a parked car).

And of course, once again I went the other way with it.

Once again this choice presented itself on the road. Once again I was on my bike. Once again I was startled into a medium grade rage by a driver with a set of keys and a self appointed license to operate it like a jackass. These kids today! Apparently when the Xbox gets old, leaning out of car windows and screaming obscenities at bicyclists serves as a “good time.” Well, since this happens about once a week I’m usually prepared for it. My usual response? Ignore it. So why didn’t I ignore it this time? Opportunity. Apparently this new breed of jackass does this sort of thing within 100 feet of the turn off for his or her neighborhood. Opportunity knocks. In a flash I’m following them into the neighborhood and riding by as a kid is getting out of the car, in front of his house. I slowed down. The kid looked back like a deer staring down the headlights. I gave him the tried and true “you’re number one” sign, reassured him that my vocabulary has a few four letter words in it too, and continued on my way home.

Why does it always seem that the rightness of a course of action is inversely proportional to its ease of execution? I don’t feel any better knowing that I’ve probably just guaranteed myself an encore performance this afternoon. In light of the whole “man v. car” thing, do you suppose Darwin is up there somewhere (or down there somewhere, depending on where you went to school) shaking his head?

“Beth, I’m not sure you should ride your bike until I can tighten those training wheels, unless of course you want me to take them off?”

“Alright dad, take them off.”

Fifteen minutes later we were together on the sidewalk; father, daughter, and bicycle. The father was standing behind it all, grasping the seat. The daughter was astride the bike, imploring the father not to let go. The bicycle was just sitting there, oblivious to it all.

After running along side for about thirty feet, Beth tells me to stop.

I was ready to indulge her, and she rewarded my faith. She struggled unassisted, feet on the pedals, for about ten feet. That’s where she stopped, feet on the ground, bike still upright. Her very first solo attempt was a success!

Naturally I hoped, hollered, and generally carried on like an English soccer fan. (Beth thought my chanting strut down the sidewalk was a bit much.) Then I ran inside to grab the camera to record the second unassisted ride. It was the best thing to happen to our house since Adam first slept through the night.

Next thing I know Beth is asking to ride to her school with a group of friends (it’s a mile and a half away, but it’s practically inside our neighborhood and you don’t have to cross any busy streets). She came home thirty minutes later and collapsed. Apparently there are some things about bicycling that can’t be learned.

The bike is back, baby! They say that one day of exercise is better than none, and we’ll be testing that theory this week, or so it seems. What began as a week filled with promise is slowly degenerating into this summer’s pattern: when it’s not raining there’s something that needs to be done with a car. Yesterday? Lower back pain induced by hurricane preparations. Today? The pain is still there, but I rode anyway! Tomorrow? Mid-day doctor’s appointment. Thursday and Friday? My fingers are crossed, but learned helplessness is setting in.

I know why the hurricane didn’t come here. Sure, meteorologists will have you believe that it was a trough of low pressure which turned the storm to the east sooner than expected, but you bought that? Here’s the scoop. I’ve got this really menacing looking Hulk shaped bottle of bubble bath in my office. (It was a gift from my co-workers, but that’s another story.) On Thursday afternoon, as we were evacuating our office, I placed my Hulk shaped bottle of bubble bath – his arms raised in a very Hulk like furry – in my window facing Tampa Bay. My thinking was, if anyone can scare away a storm it’s the Hulk, right? I think this could lead to a revolution in preventative meteorology.

I have been the satisfied owner of a neon yellow, aluminum frame, Trek bicycle since January 1991. I have gone in and out of bicycle shops through the years, but I’ve restricted my browsing to items of need rather than desire. In this way, I have substantially eluded the phenomenon known as “Post-shopping stress disorder”, or P.S.S.D. (pronounced “pissed”). References to P.S.S.D. can often be seen in popular American slang. Common phrases like: “I came back from shopping today really P.S.S.D.”; or, “I saw this really cool pair of pants on sale at the mall today and nearly P.S.S.D. myself” are but a few examples.

Well you guessed it; I went to the bike shop on Saturday and P.S.S.D myself over a new bike.

Coughing up a cool thousand on a new purchase hasn’t looked so good in nearly seventy-two hours (when separation anxiety set in over my hospitalized iBook).

This is a story of a man whose adventures will one day be remembered in song. This is the story of John, of the suburban warrior clan Kauffman.

“Yeah, though he walks through the shadows of the valley of Beth, he shall fear no tantrum.”

“Neither early hour, lack of sleep, looming holiday, nor foul taste of breath, shall keep him from his appointed rounds.”

“Sick to his stomach and he’s still riding that damn bike to work?”

“Doesn’t have much sense as to what is lyrical, does he?”

It is that rarest of workplace occasions, the Friday before a holiday. They only come two or three to a year – tops. When they do, there’s a dearth of warm bodies in the office. Me? I’m usually right here in my office, toiling away the minutes with remarkable dedication. Although, I am taking a time out to write… maybe I’m not so dedicated after all.

Maestro, cue up the band. It’s time to pick things up a notch. (Or just turn on the radio, which ever is more convenient.)